This guy just will not answer the question. And if he thinks it’s going to go away, he’s sadly mistaken. His lawyering up and refusal to give a simple yes or no answer is just going to make things worse.  And his refusals make him look guilty. How much more stupid can he be?

Thanks to Townhall.com, this is good:

Micheal Medved: New and younger faces in the GOP

It’s true that the November elections brought prominent winners in both parties, but the contrast between Democratic and Republican victors is highly revealing.

The Democrats, in other words, have become a party of shop-worn retreads while the GOP bench is full of next-generation leaders of potential national stature, including Governors Chris Christie of New Jersey, Bobby Jindal of Louisiana, Tim Pawlenty of Minnesota, Rick Perry of Texas, Mitch Daniels of Indiana, Senators John Thune of South Dakota, Scott Brown of Massachusetts, and many more.

Looking toward the future, the rising stars of the GOP not only look more vibrant and dynamic than the Pelosi/Reid Democrats, they also count as increasingly diverse.

In the new Republican House of Representatives, eight members of the GOP majority will proudly qualify for a potential “Republican Hispanic Caucus.” Geraldo Rivera may dismiss such victories as “window dressing,” (as he did recently on Fox News) but they have changed both image and substance of the GOP.

Monty Hall wouldn’t even write this kind of Constitution 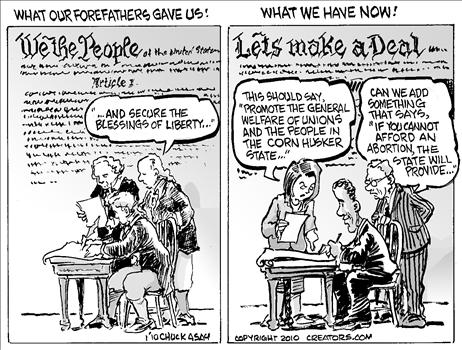 The problem isn’t just the FDA of course, but also the legions of plaintiffs’ lawyers who need a replacement for cigarette and asbestos plaintiffs.  Imagine the vista that is opening before them as they consider suits for damages brought against makers of all sorts of food products which can be alleged to have contributed to Dick’s and Jane’s diabetes developing at age 10 due to chronic obesity.  The jury will be presented with the FDA’s statements and experts will testify on how the Fruit Loops fairly lept from the shelves into the mouths of children everywhere.  Cha-ching. 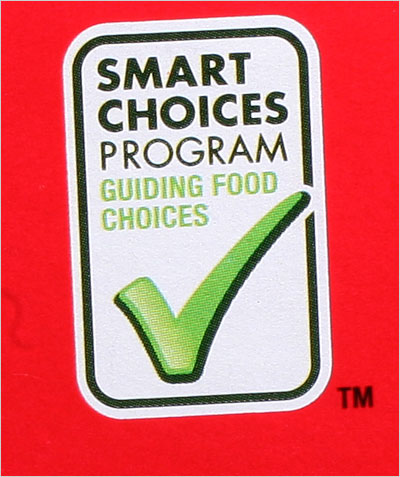 The new food seal of apporval

We’ve had the tobacco industry to financially eviscerate, drug companies, then asbestos and now it’s going to be cereal?  Just as the tobacco lawsuits have been, this is going to be another boon for the attorneys in this country.

More lawsuits because some cereal made my child fat and all facilitated by the federal government. Thank you for that.

Undercover journalism is only acceptable when it fits a liberal agenda. That is the message from “professional” reporters and left-wing activists outraged about three successful video stings targeting President Obama’s old friends at the left-wing tax-subsidized outfit ACORN.

Conservative documentarian James O’Keefe and writer Hannah Giles, working for the BigGovernment.com website, posed as a pimp and prostitute during visits to ACORN offices in Baltimore, Washington, D.C., and Brooklyn. ACORN housing officials and tax advisers offered them brazen suggestions on how to lie on their applications, disguise their income, obscure their child sex-ring business and hide cash from abusive johns. (“When you buy the house with the backyard, you get a tin,” an ACORN counselor in New York told Giles, “and you bury it down in there, cover it and put the grass over it.”)

Summing up the ACORN Housing Corporation philosophy, another Brooklyn ACORN official told the undercover pair bluntly: “Honesty is not going to get you the house.”

ACORN spokesman Scott Levenson blasted the investigation as “gotcha journalism.” Echoing ACORN’s defenders, MSNBC anchor Norah O’Donnell fretted on Tuesday that Giles and O’Keefe’s methods “might be viewed as entrapment. That some conservative activists used hidden cameras to get this stuff on camera.”

O’Donnell has apparently forgotten the inglorious history of news “entrapment” by her betters at NBC News.

This is the network that surreptitiously rigged GM pickup trucks in staged crash tests in 1993 to show that the vehicles were unsafe — and failed to inform viewers that the simulations used incendiary devices to ignite the explosions. Jane Pauley admitted in a nationally televised apology that “NBC’s contractor did put incendiary devices under the trucks to ensure there would be a fire if gasoline were released from the gas tank. NBC personnel knew this before we aired the program, but the public was not informed because consultants at the scene told us the devices did not start the fire. We agree with GM that we should have told the viewer about these devices.”

This is the network that pioneered the “To Catch a Predator” series — an investigative sting operation to nab Internet pedophiles. Until last year, the journalists worked with activist group Perverted Justice, whose members posed as children in web chat rooms to lure alleged pedophiles to a residential home.

This is the network that sent out an intrepid NBC News reporter in a canoe to cover treacherous New Jersey flooding in 2005 — only to be shown up by passers-by who sloshed in front of the camera and demonstrated that the water was only a few inches deep.

This is the network that tried to arrange Islamophobia stings at NASCAR events in 2006 to try to “expose” racism among Southerners. The network worked with a Muslim activist who sent a recruitment notice across the Internet:

“I have been talking with a producer of the NBC Dateline show, and he is in the process of filming a piece on anti-Muslim and anti-Arab discrimination in the USA. They are looking for some Muslim male candidates for their show who would be willing to go to non-Muslim gatherings and see if they attract any discriminatory comments or actions while being filmed. … NBC is willing to fly in someone and cover their weekend expenses. The filming would take place all day on Saturday and Sunday.”

“Professional” undercover journalists see their work as serving the public and national interests, exposing wrongdoing, and blowing the whistle on illicit activities that would not otherwise see the light of day. But this is exactly what the ACORN stings have done.

Taxpayers deserve to know how ACORN and its vast web of nonprofit, tax-exempt affiliates are using their money (40 percent of the group’s revenue comes from the government). The flagship group trains publicly funded ACORN tax advisers and mortgage counselors across the country. In fact, ACORN is now managing apartments in Bedford-Stuyvesant, N.Y., for the newly completed Atlantic Avenue Apartments. Yet, ACORN Housing Corporation has a long history of abusing federal housing funds and AmeriCorps grants for political activities.

Head-in-the-sand ABC News anchor Charles Gibson claimed he “didn’t know” about the ACORN scandal this week and snarked that “maybe this is just one you leave to the cables.”

Giles and O’Keefe’s investigations (and there are more to come, according to BigGovernment.com’s Andrew Breitbart) have exposed not one but two protection rackets: ACORN’s — and the ostrich media’s.