This isn’t Camelot or the court of the Sun King

Reading The American Spectator today, Norman Podhoertz in the Wall Street Journal and Nile Gardiner of the UK Telegraph, reminded me of Evan Thomas (grandson of that loser but perennial socialist presidential candidate, Norman Thomas) declaring to Chris “tingly leg” Matthews in 2009 that “Obama is sorta god.”

(As an aside, Chris really should have this tingly leg thing checked out. It could be neuropathy caused by undiagnosed diabetes or something and maybe shove himself away from those jelly doughnuts, just in case it is. A weekly workout in the MSNBC gym wouldn’t hurt him, either. His god-dess Michelle will be the first to tell him, and the rest of us, that obesity is the number 1 cause of diabetes.)

But I digress and that’s a whole other blog.

Those were the days, weren’t they? Obama on the cover of every “news” magazine in the grocery store checkout line with the celestial halo around him, head upturned and nose in the air; the frown of determination and decisiveness across his face. 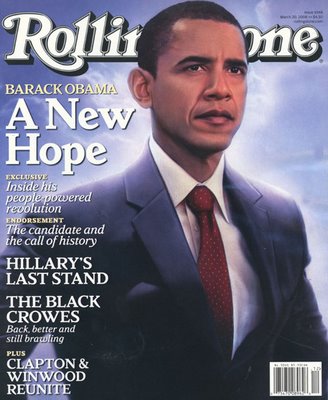 Under the spell of the messiah on Rolling Stone

Yes, Evan, he really was above us – on a ledge of your making. And every journalist in the nation, nay world, was all too quick and willing to acquiesce to their new found god Obama. His was the soaring rhetoric that was going to heal the world:

In the American Spectator, George Neumayr relates that “Obama loomed even larger than Lincoln. He was a “Lightworker,” as San Francisco Chronicle columnist Mark Morford​ put it in 2008, “that rare kind of attuned being who has the ability to lead us not merely to new foreign policies or health care plans or whatnot, but who can actually help usher in a new way of being on the planet, of relating and connecting and engaging with this bizarre earthly experiment.” [A bizarre earthly experiment? Does anyone really talk like this? Maybe if you were in a 70’s consciousness raising group, or something…]

Now that the Lightworker has fallen to earth and the glorious new way of being on the planet turns out to be a lowered credit rating, some of his prominent supporters have fallen silent or resentful. Heady Lincoln comparisons have given way to Carter comparisons, sotto voce: “We are watching him turn into Jimmy Carter right before our eyes,” an anonymous Democratic Senator said to New York Times columnist Maureen Dowd​.

Yep, well it’s a long, hard fall when you’re up “above the world” looking down.  It’s an even harder fall when you start to believe all the mythology about yourself.

There is a disturbing let them eat cake mentality projected by the Obama White House … No US presidency in modern times has been more elitist or out of touch than the present one, which exudes the kind of condescending left-wing snobbery that is normally the preserve of an ivory tower common room. President Obama looks increasingly aloof and out of sync with the American people, three quarters of whom now believe the country is heading down the wrong track – including a staggering 58 percent of Democrats, according to Rasmussen. Nile Gardiner/UK Telegraph

Norman Podhoretz says that his “own answer to the question, “What Happened to Obama?” is that nothing happened to him. He is still the same anti-American leftist he was before becoming our president, and it is this rather than inexperience or incompetence or weakness or stupidity that accounts for the richly deserved failure both at home and abroad of the policies stemming from that reprehensible cast of mind.”

Who really thinks that the Dems will be clamoring for Michelle to come campaign for them now?

It’s a sad day when we have to get our news from the British press. But Mr. Gardiner seems to have an excellent feel for what most Americans are experiencing.

The Obama presidency increasingly resembles a modern-day Ancien Tegime: extravagant and out of touch with the American people

What the great French historian Alexis de Tocqueville would make of today’s Obama administration were he alive today is anyone’s guess. But I would wager that the author of L’Ancien Régime and Democracy in America would be less than impressed with the extravagance and arrogance on display among the White House elites that rule America as though they had been handed some divine right to govern with impunity.

It is the kind of impunity that has been highlighted on the world stage this week by Michelle Obama’s hugely costly trip to Spain, which has prompted a New York Post columnist Andrea Tantaros to dub the First Lady a contemporary Marie Antoinette. As The Telegraph reports, while the Obamas are covering their own vacation expenses such as accommodation, the trip may cost US taxpayers as much as $375,000 in terms of secret service security and flight costs on Air Force Two.

The timing of this lavish European vacation could not have come at a worse moment, when unemployment in America stands at 10 percent, and large numbers of Americans are fighting to survive financially in the wake of the global economic downturn. It sends a message of indifference, even contempt, for the millions of Americans who are struggling just to feed their families on a daily basis and pay the mortgage, while the size of the national debt balloons to Greek-style proportions.

While the liberal-dominated US mainstream media have largely ignored the story, it is all over the blogosphere and talk radio, and will undoubtedly add to the President’s free falling poll ratings. As much as the media establishment turn a blind eye to stories like this, which are major news in the international media, the American public is increasingly turning to alternative news sources, including the British press, which has a far less deferential approach towards the White House.

The First Lady’s ill-conceived trip to Marbella and the complete disregard for public opinion and concerns over excessive government spending is symbolic of a far wider problem with the Obama presidency – the overarching disdain for the principles of limited government, individual liberty and free enterprise that have built the United States over the course of nearly two and a half centuries into the most powerful and free nation on earth.

It is epitomised above all by the President’s relentless drive towards big government against the will of the American people, and the dramatic increases in government spending and borrowing, which threaten to leave the US hugely in debt for generations. It is also showcased by Barack Obama’s drive towards a socialised health care system, which, as I’ve noted before, is “a thinly disguised vanity project for a president who is committed to transforming the United States from the world’s most successful large-scale free enterprise economy, to a highly interventionist society with a massive role for centralized government.”

There is however a political revolution fast approaching Washington that is driven not by mob rule but by the power of ideas and principles, based upon the ideals of the Founding Fathers and the US Constitution. It is a distinctly conservative revolution that is sweeping America and is reflected in almost every poll ahead of this November’s mid-terms. It is based on a belief in individual liberty, limited government, and above all, political accountability from the ruling elites. The Obama administration’s mantra may well be “let them eat cake”, as it continues to gorge itself on taxpayers’ money, but it will be looking nervously over its shoulder as public unease mounts.

On the other side of the web, we get this lame apologetic column. What this reporter and all the other members of the liberal media just don’t seem to understand is that no one begrudges the first family their vacations. What most Americans take issue with is the appearance and level of indifference that the elites in this regime have for the rest of us. She thumbs her nose at us in her haute coiture attire, while she’s telling us to watch what we eat and she dines on lobster. She shuts down beaches while the rest of us can’t afford to take our kids to 6 Flags.

Cokie Roberts told George Stephanopolus that “after all, Spain needs our help [in tax dollars], too.”  Thus, justifying the $350,000 in OUR money that Michelle spent in the last week. Why does no one think that there aren’t states – like on the gulf coast – who could use some exposure from the first family? Well, after the fact, they are now going to be spending a night or 2 in Florida.

A little late to make a difference now. The image of an uncaring, extravagant first lady and for that matter, first family, is already cast.

So here goes with the WH spin:

First Lady Michelle Obama took a lot of grief for her decision to vacation in Spain last week, a glitzy getaway that prompted one New York Daily News columnist to liken her to Marie Antoinette. But now we’re learning more about the trip, which, despite the furor over its alleged excess, seems to have been launched with good intentions.

According to the Chicago Sun-Times’ Lynn Sweet, the first lady made the trip because she wanted to spend time with her best friend, Chicago physician Anita Blanchard, who lost her father this summer. Blanchard (who is married to President Obama’s best friend, Marty Nesbitt) planned a Spanish vacation with her daughter and invited the first lady and her daughters to come along. Michelle, who missed Blanchard’s father’s funeral in July, agreed and brought along her 9-year-old daughter, Sasha. The first couple’s older daughter, Malia, is away at camp.

According to Sweet, one other mutual friend came along with her own two daughters. And according to the White House, all parties paid for their own hotel rooms and personal expenses.

Speaking of the hotel: As The Upshot speculated last week, it was the Secret Service that booked the Obama group’s rooms at the luxury Hotel Villa Padierna, in part because agents could guard the perimeter of the property much better than they could at rival facilities.

The big question: Why did the White House wait nearly a week to get this information out? By simply refusing to comment with any detail on the first lady’s trip, the White House gave serious ammunition to a story that probably wouldn’t have been nearly as controversial if all the facts had been laid out in the beginning.

Sometimes it’s the first lady herself who makes such media decisions. Laura Bush often refused to allow her press office to comment on stories about her or her daughters that she felt intruded on her personal life. But as Sweet notes, first ladies are public figures whether they like it or not.

Quote of the Day

“The spirit of Ronald Reagan is alive and well in America, exemplified by strong public backing for the principles of limited government, free enterprise, individual responsibility and a strong defence. The White House should sit up and take note: it is liberalism, and not conservatism, that is in decline in the United States.”
Nile Gardiner/Telegraph.co.uk

Good column and worth reading. Rush highlighted it on his show today.