Too many of us are hearing but not listening

Imagine you can’t pay all your bills.

For the sake of simplicity, you owe $1000 this month but you only have $600. You will have to borrow $400 to make it through the month. Now imagine you have to do that every month for the next year. That’s $4800 you will need to borrow to pay your bills for the year. And you know that you’re going to have to borrow that same amount every month for the next year (and the foreseeable future.)

What would you do?

You could start by calling  your banker or your credit card company and ask them to raise your borrowing limit.  Chances are real good they will laugh at you, before telling you no. And anyone with a high school education knows that raising your DEBT LIMIT will only dig your hole deeper in the long run.

So, you sit down at the kitchen table and prioritize. If you’re an average American, you start cutting out all the things you can do without so you can pay for the things that matter, like your mortgage and medicine and your personal yacht.

Then you put a lid or a cap on all your future spending.

No more dinners on Broadway or flying your favorite pizza chef in from Chicago.

No more Spanish vacations in your private jet. What? You don’t have a jet?

No more entertainment like those private Paul McCartney or Stevie Wonder concerts.

Next, you start looking around your house at the things you can live without and sell off. But remember, that’s only going to get you through a month or 2. Eventually, you’ll run out of things you can sell, unless you live in the White House and then there’s an unlimited amount of things of value to sell.

Maybe your Wall Street friends will throw fund raising parties for you. Oh please. Don’t tell me you have no Wall Street buds.

Publish a book with a well known terrorist ghost writing it for you? You don’t know any terrorists? Sucks to be you, then.

You don’t have a $10 million winery in California that you can sell? Oh, sorry. I’d mistaken you for Nancy Pelosi.

This isn’t our life. But we are shouldering the burden for these expenses and all the expenses that benefit everyone else, including and most irritating – the political class.

And most of us would like to see the ruling class suffering just a little bit with us.

In an effort to pander to the far left loons in his party, Reid omits the words “under God” from his Civil War dissertation.

At the same time, in a speech this week at Tufts University, Pelosi is advising Republicans to “take back your party” because “elections shouldn’t matter as much as they do.”

Message to the voters? You really don’t have to vote because it really shouldn’t matter who wins. Message to her Republican colleagues? Elections only have consequences when the democrats win.

Some one put Harry in a home

Oh my God, Harry Reid really does appear to be losing his mind.

And that was just as much as I could stand to watch.

It’s hard to believe that anyone buys his bullshit but obviously he won the last election, so someone in Nevada does. And do Americans understand that he is standing before them and telling them that the dems are holding up this bill because they are worried about cancer screenings? Seriously? Does anyone really believe this?

Cowboy poetry? There’s a political ad dying to be made…

Quote of the day – Nancy Pelosi

Pelosi — who is widely viewed as the person most responsible for ensuring that Dems drew a hard line against Bush’s privatization proposals — said that so doing would have persuaded people that there must have been something wrong with Social Security that needed fixing. She suggested that Dems should keep that message in mind as they prepare to do battle over Ryan’s Medicare proposals.

“We got criticized for it, but it was the most important thing,” Pelosi said. “We couldn’t have our own proposal on Social Security because it would confuse the public.” from the Washington Post via Fox Nation

Harry’s still standing. I guess I can’t have everything.

You know, honestly when I realized that Chuck Schumer would likely be the next Majority Leader, it hurt less to see that Harry would still be in the Senate.  And at first, I was disappointed about losing in the Senate until I was educated that it would be better for Conservatives in ’12 if we didn’t have both houses right now. And Pelosi is out!

Half a loaf is better than none.

I was very happy with a lot of the wins. Kirk in Ill, for one, was a great win! Toomey in PA, Marco Rubio and in Ohio, John Kasich for governor are great wins, too.

Of course, CA is a lost cause. A state that keeps Boxer, Waxman and elects Jerry Brown AGAIN, is past hope. Leave those people to their own destruction. If they really believe that Jerry Brown will save them, even a little bit, they are delusional.  CA politics matter a lot to me because those folks leave in waves for Nevada and Arizona and when they do, they change the demographics of the state. Since 1989 when I first moved to Nevada,  it’s become more blue and more democrat leaning due strictly to the CA exodus.  I see that same thing in the southern part of AZ, too.

As for my state: All the ballot initiatives that I voted for, except for legalizing medical marijuana, passed. We will not have card check. We voted against the national health care and won. And affirmative action went down. The marijuana issue was a minor point for me compared to the other ballot questions so I’m not real disappointed.

Governor Brewer won handily. My Congressman, Trent Franks was re-elected just as easily. Both wins are good news. McCain is still standing, which is better than having his democrat opponent in place.

Fifty-eight percent (58%) of these voters say the average Democrat in Congress is more liberal than they are. Only 10% say that member of Congress is more conservative, while 27% see his or her views as about the same as theirs.

Fifty-five percent (55%) say it’s more accurate to describe the political views of most Democrats in Congress as extreme rather than mainstream.

Congress has to make the effort to repeal health care and hold back any more ridiculous spending.

And now we go to work firing Obama in ’12. I’m very optimistic about the next 2 years.

Dina Titus: Another of Pelosi’s casualties

Speaking on the health care vote,  [Dina Titus’] introduction to the wider Washington establishment Wednesday as the freshman who told the speaker and colleagues they were “(expletive)” if they didn’t learn the lessons from Republicans’ electoral victory in Massachusetts seals her spot as a tough-talking Nevadan.

Today in the Las Vegas R-J the freshman congresswoman is polling 10 points behind her challenger and in a very democratic area of Clark County.

Dina, you get to go back home and be tough talkin’. You and your party blew it.

Dina saw the writing on the wall while the rest of her party pretended that it wasn’t happening. Brown won in Massachusetts as well as Virginia and New Jersey going to Republicans.  But still the democrats ignored the voters messages.  I guess they thought the summer of recovery would make it all alright again.

What happened was the people got angrier for being ignored.

Don’t listen to the people and pay at the polls.

Fooling the democrats and the voters with a new brand – but will it work? 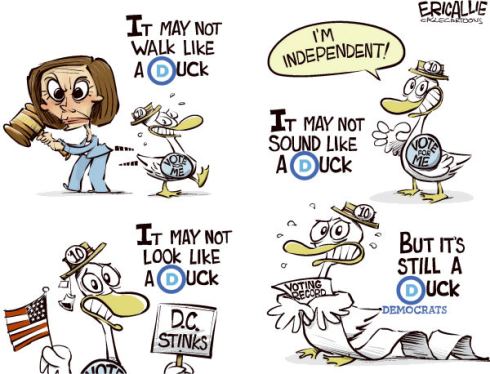 From Drudge: Biden says he’s 2nd in line to be president

Biden never lets us down.

In a swift and unexpected decision, the Environmental Protection Agency today rejected a petition from environmental groups to ban the use of lead in bullets and shotgun shells, claiming it doesn’t have jurisdiction to weigh on the controversial Second Amendment issue.

Dontcha just love this media bias? For whom is the Second Amendment controversial? And why is it? It’s pretty clear to anyone who is literate:

A well regulated militia being necessary to the security of a free State, the right of the People to keep and bear arms shall not be infringed.

But the media love to throw in these buzz words and phrases – like controversial – to confuse and/or manipulate the readers thought process. And isn’t it kinda strange to call anything in the Constitution “controversial”? I don’t believe that the Founders intended for that document to be “controversial”. I really believe that they wanted the people to understand it, wrote it so that the people would understand it and they didn’t expect that over 2 centuries later we would need constitutional attorneys to explain it to us.

But hey, that’s just me.

The decision was a huge victory for the National Rifle Association which just seven days ago asked that the EPA reject the petition, suggesting that it was a back door attempt to limit hunting and impose gun control. It also was a politically savvy move to take gun control off the table as the Democrats ready for a very difficult midterm election.

This is the real reason that the EPA dropped this whole thing. The NRA had nothing to do with it, even though they are absolutely correct that this is nothing more than the first step on the ladder to gun control. It was the administration that sent word to the EPA to lay off the bullet thing in order to make it easier on the Democrats who are swimming against what we all hope and pray will  be a tsunami this election year.

And then there’s this from ABCNews.go.com:,

A conservative Alabama Democrat often criticized for backing Nancy Pelosi as House speaker dodged a question about supporting her again next year by saying she might get sick and die before he has to decide.

If someone is going to say something tasteless, rude or stupid, it will have to be someone with the CONSERVATIVE label before their name, whether they are Democrats or pachyderms makes no difference. The media is going to make damned sure they work that word in, anytime they can smear those who have a conservative ideology.

from Karl Rove in todays WSJ

Mr. Obama and his people also mischaracterize where most stimulus dollars go. Their constant prattle about “shovel ready projects” is an attempt to leave the impression that most goes to bricks and mortar. Not true: Only 3.3% of the $814 billion stimulus went to the Federal Highway Administration for highway and bridge projects.

The administration’s misleading statements and obfuscations aren’t limited to the economy. On health care, for example, Mr. Obama continues saying that (a) health-care reform will reduce costs and the deficit, (b) no one who wants to keep existing coverage will lose it, and (c) the law’s cuts in Medicare won’t threaten any senior’s health care. These assertions are laughable.

The president’s habit of exaggeration and misstatement has infected other Democrats. Speaker Nancy Pelosi, for example, routinely talks about how the recently passed “Stimulus II” spending bill protected the jobs of police and firemen.

Stimulus II consisted of two parts: $10 billion for education and $16 billion for Medicaid. States can’t spend Medicaid money for anything but Medicaid, and they can only spend the education money on education, i.e., they can’t shuffle state funds around. Language allowing Stimulus II dollars to pay for police and firemen didn’t make it out of the Senate. Yet Democratic leaders persist in saying that their latest stimulus has helped keep police and firefighters on the job. The claim is flatly untrue.