The One hits the links on Memorial Day

Come hell or high water (2 phenomena that the midwest and south have been experiencing lately, not to mention the troops that were honored today) TheOne, believe it or not, went golfing. Just hours after he laid a wreath at the Tomb of the Unknowns and met with military families, he’s hitting the links.

This guy is beyond cold, beyond callous.

Imagine this is 4 or 5 years ago and this were George Bush. Would the press have turned a blind eye to this? I think not. In fact, as all of us know, Bush gave up golf while in the White House out of respect for our troops and their families. And like a real man, he kept his word.

While in England, the Obamas met the royal newlyweds. Duchess Kate wore an off the rack $300 dress and the self appointed American Queen wore a designer dress worth over $25o0 or maybe it was over $3000 – I just know it was way out of line.  The Brits are facing economic hard times, just as we are and their newest royal is setting a tone of austerity that our leaders’ wives could take a lesson about.  I remember when Nancy Reagan replaced the White House china with private donations (no tax dollars were used) and she was crucified in the press for being extravagant.  But once again, the current first lady can wear expensive designer clothes and feed the homeless in $540 sneakers and employ non-American designers and it’s all OKAY.

H/t to my best friend in GA:

We had a responsibility to act… SO???

According to who? And why?

Oh, I remember now – we need the oil. Our allies need the oil. Where are all those anti-war protestors that screamed “no blood for oil” during the Bush years? What’s happened to the stupid Cindy Sheehan?

Okay, now this conservative is screaming it: No blood for oil! Bring our soldiers home!

I could NOT care less about muslims killing muslims. And I don’t want our soldiers sacrificed to protect them from each other. When they are done killing each other, they’ll be back to killing us.

This Libya thing is about civil war – a power struggle – and oil.

If we are arming ONE Al Qaeda member, that’s one too many. If we are aiding one, it’s one too many. None of us have forgotten who attacked us on 9/11. I’m sure there are a lot of liberals in this country who have, including it seems, TheOne, but the majority of us, regular Americans, have not forgotten.

The Libyans are  tribes, who mostly still live in a stone age with cell phones and modern weapons. They don’t care about or understand western democracy. They aren’t fighting for “freedom.” Who’s kidding who? They are fighting for power and control. And the ones who win (most likely it will be Al Qaeda) won’t be our pals. They’ll be very rich – oil rich – enemies.

Wake up, America! they won’t like us any better than they did on 9/11 or 2 days ago. A no-fly zone and air cover is not going to change that and the president just can’t seem to “get it.” They may have the same color politics – Obama and the muslims – but that’s where it ends.

WHERE IS THAT DAMNED OUTRAGE, MISTER PRESIDENT? WHAT HAPPENED TO THAT ”RESPONSIBLITY TO ACT?” 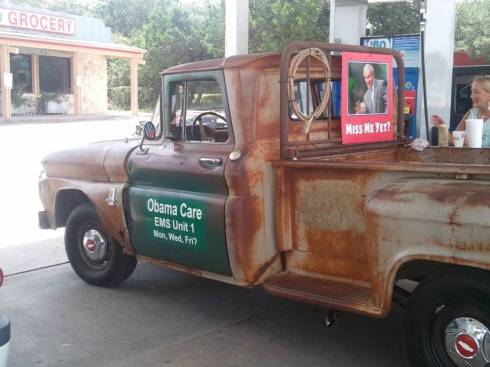 Our future under ObamaCare

“Bush just likes to blow things up” including our children:

For all his flaws and mistakes, Americans largely did not doubt George Bush’s love of country. He acted immediately after 9/11 with harsh words and harsh actions against the enemy. In fact, he was criticized by the left for jingoism, or too much love of country.

Obama, on the other hand, has done what would be unthinkable for a commander-in-chief in an earlier time. His demeanor during the press conference after the foiled Christmas Day attack was without emotion. He has done what would be taken as treason by besmirching his own country on foreign soil. The year was filled with him bowing to America’s enemies and glad-handing with Hugo Chavez. His Department of Justice is persecuting the CIA, of which seven members just died in Afghanistan. He states his discomfort with victory in Afghanistan, while cutting the military budget and changing the rules of engagement to favor the enemy. Through his Justice Department he is according terrorists who killed nearly 3,000 of our citizens the same rights and conducting a trial in the midst of survivors who will pay for the defense through their taxes. The Department of Homeland Security instructed law enforcement to go after dissenting patriotic Americans, particularly military veterans, and displayed callous disregard of the facts and the fears surrounding the thwarted Christmas Day terror attack.

One of the most treasonous acts concerns the communist, antiwar group Code Pink, which has been aiding and funding the enemy and raising money for Obama. As our vulnerable soldiers awaited word about sending more troops to Afghanistan, Obama was meeting with Code Pink, as recent videos show.

In 2008, there were reports out about Jodie Evans’ fundraising for the Obama campaign. But only the most careful readers noticed back then.

Obama is not merely “clueless.” Even when he gives lip service about the regrettable necessity of war as he did in the Nobel speech, Obama’s words do not ring true because they lack conviction.

Finally, someone says what I’ve been feeling

I’ve not been able to put my finger on exactly what disturbs me about TheOne. But this blog by Robin (a psychotherapist) finally says what I’ve been feeling all along about him. I’ve always felt like there was something wrong, something just not right about him. Without a script, without a playbook, without a teleprompter, Obama appears to be empty.

When our Military is Attacked, Obama is a Nowhere Man

By Robin of Berkeley

He’s a real nowhere man,
Sitting in his Nowhere Land,
Making all his nowhere plans
for nobody . . .
He’s as blind as he can be,
Just sees what he wants to see,
Nowhere Man can you see me at all?
(Lennon, McCarthy)

And, frankly, I don’t know if this president is capable of it.

The Bushes entered and departed the sprawling military facility in secret, having told the base commander they did not want press coverage of their visit, a source told Fox News.

The couple was described as “deeply concerned” about military families on Fort Hood after Army Maj. Nidal Malik Hasan allegedly opened fire on soldiers and civilians, killing 13 and wounding 38.

The Bushes, who have a 1,600-acre property known as Prairie Chapel Ranch less than 30 miles from Fort Hood in central Texas, spent between one and two hours visiting the wounded and their families.

Could H1N1 be Obama’s Katrina?

Call me a conspiracy nut but this might very well be Obama’s Katrina.

Indulge me for a moment.

Never let a good crisis go to waste. And what if you can’t wait or depend on a natural crisis – like hurricane Katrina  or another 1989 San Francisco earthquake – to occur? Obama might be the messiah to some people but he can’t yet cause hurricanes, tornadoes and earthquakes to happen.

However, he can do 2 things.

How ’bout he creates his own crisis and calls it a “national emergency”? What if this flu isn’t as bad as the WH says it is? What if it isn’t the “national emergency” that he has declared it to be but he amplifys it into something really scary for his own nefarious reasons?

Or what if it is that bad – and worse – and he’s exploiting it for his own gain?

Agree or not, many pundits and historians claim that president Bush’s public opinion took a severe downturn that he never really recovered from, when Katrina happened and complaints were that his administration didn’t respond quickly enough or sensitively enough. Obama could be using this flu as a  “national emergency” to bolster his sagging approval ratings. Yanno, make the comparison between him and Bush and who did a better job of managing a “national crisis.”

Silly, you say? Bush is long gone, true enough but Obama has continued his campaign against Bush since he took his own botched oath of office. The problem is that these going on 3 year stump speeches are getting old to most of us.

It’s unfortunate to see the sinister in everything but TheOne has surrounded himself with such bullies that nothing they do or say can go unchecked. Why do you pick the friends you do? Because they reflect behaviors that we see or want to see in ourselves.  Remember what your mom told you: moms have always been the wisest creatures on earth.

Not to down play the deaths, especially of children, due to this flu. Those are tragic and untimely. But I can no longer take what anyone in the WH tells me at face value. And I don’t put it passed those guys in the administration to use this pandemic and the tragedy that goes with it, as a vehicle to further Obama’s own agenda: make him look like the savior they all believe him to be – the savior they all want US to believe he is.

The flu is here. People are getting sick and many are tragically dying. Those are facts that can’t be disputed. Whether this president uses this event for self aggrandizement, I guess we’ll see.

Quote of the day

“… Obama is constantly dodging responsibility for the problems he “inherited,” when in truth he did not inherit anything. By running for president, he sought the responsibility he now tries to evade.” James Taranto,  wsj.com