Read it and weep: California is lost to collective insanity.

I’m sure you’ve all heard this goofy-assed story that the California state legislature is trying to remove the serpentine as its state rooooock. Yes?

But do you know why? I mean really why? Well they are trying to tell everyone that it’s because the rooooock has, as part of it’s componant, asbestos. And we all know, well those of us who stay up really late watching television commercials for lawyers,  that asbestos exposure causes mesothelioma. Lung cancer. The legislators are saying to the public that they don’t want a known carcinogen as a state rock. I mean, seriously, how would that look for a state like California to have a rooooock that contains cancer causing components (love alliteration) out there for all the world to see? Even though there are some geologists who say that asbetos is not in all serpentine. It is naturally occurring in some rooooocks and not in others. And we all know that it’s not cancer causing as it appears in a roooock.

Know why? Well, I’m gonna tell ya why:

Surprise!  –  Because if this bill is passed, it opens the door for more lawsuits!

Were SB 624 to become law, declaring serpentine as carcinogenic, it could widen the opportunities for lawsuits against owners of property with naturally occurring outcroppings of serpentine. And it’s become a new skirmish in the perennial war between personal injury lawyers and the business-backed Civil Justice Association of California.

“I’ve heard that personal injury lawyers will leave no stone unturned in their hunt for new cases, but this is ridiculous,” said John Sullivan, the association’s president.

You can read the whole story here.

You want to know why Americans don’t trust this president? Read Socialism is not the Answer.

If you read nothing else this year, make this your one book. David Limbaugh has written the definitive book  of this president and his administration and I’m sure that in the coming 2 years he will have more to add for a volume II.

I couldn’t wait to get my hands on it last week and now I can’t put it down. It’s a fast, easy read, full of information we have all forgotten (the never occurring but muchly bragged on so-called transparency of putting a bill online for 5 days so that the American people can read it) and information many of us never knew before (locking out 150 kindergartners from a White House tour because, due to heavy traffic, they arrived 10 minutes late. White House staffers claimed that their late entry would interfere with a scheduled meeting between TheOne and the Superbowl winning Pittsburgh Steelers.)

Limbaugh correctly claims that Obama is tone deaf to what Americans want and what they believe but he also apparently lacks the basic understanding of human emotions. In his speech when he signed the Freedom of the Press Act, he told reporters, “Obviously, the loss of Daniel Pearl was one of those moments that captured the world’s imagination because it reminded us of how valuable a free press is.”

A beheading that “captured the world’s imagination”? Is this a total disconnect or what? I read this in the first 35 pages of the book and was stunned. But Jim Hoft (Gateway Pundit) put it best:

This book is a stunning indictment of the man whose sole purpose is to bring America to its knees and unless he is stopped on election day 2012, the damage very well might irreparable.

America is in a dangerously rapid nosedive under Obama’s navigation. The key to our delivery from this systematic assault is for the Americn people to understand Obama’s extremist agenda, to get engaged and to do everything we can to peaceably remove him and his supporters from office at election time and replace then with constitution- revering, liberty-lovering public servants who respect the rule of law.

No matter how bleak conditions look now, we have reason for optimism, as the American people, like no other people in world history, love and appreciate the liberty bestowed upon us by our foundeing fathers and preserved by the blood of our patriotic ancestors.

Get your hands on this book and read it. Arm yourself with the truth in order to disarm and dismantle Obama’s leftist machine. . . before it’s too late.

Lieberman supports Harry Reid to the tune of $14K

You need another reason to doubt Joe Lieberman’s politics? He tops the list in donations to Harry Reid from legislators – donating $14,000. That alone illustrates his lack of sense. He’s financially backed losers and God willing, Reid will be another.

Lieberman has given $30,000 overall during this election cycle, all to Democrats. The Democrat-turned-Independent has been especially generous to those facing  — or who faced — uphill re-election battles, such as Sens. Blanche Lincoln (Ark.), Chris Dodd (Conn.) and Arlen Specter (Pa.). Lincoln is trailing in her race by double-digits, while Specter lost his May primary bid and Dodd announced his retirement this spring after polls showed him trailing in Connecticut.

The Blaze, Beck’s new site is launching today. ﻿His website editor is Scott Baker, formerly of Breitbart.tv and “The B-Cast.”

We talked to [Scott] Baker today about what readers can expect from the new site, the team behind it and more. “It’ll be news and information,” he told Mediaite. “Some commentary and opinion stories we’re interested in that are being under-covered or not covered.”

People will inevitably make the comparison to Arianna Huffington – whether Beck’s role as figurehead behind the site will make The Blaze into a conservative Huffington Post. “The one thing pretty clear around Mercury [Beck’s company] is that Glenn is not short on ideas or hesitant on input,” Baker said. “His input is already evident in how the site looks, and that’s what will continue. It will be a continual flow of tips and suggestions and encouragement.”

Beck’s message on his new site:

But there comes a time when you have to stop complaining and do something. And so we decided to hire some actual journalists to launch a new website — The Blaze. And we moved fast. We built the team and the site in just two months.

We want this to be a place where you can find breaking news, original reporting, insightful opinions and engaging videos about the stories that matter most.

The Blaze will be about current news — and more. It’s not just politics and policy. It’s looking for insight wherever we find it. We’ll examine our culture, deal with matters of faith and family, and we won’t be afraid of a history lesson.

Caption these: 2 world leaders on vacation

Putin with a crossbow out whaling. from YahooNews

Don’t anyone ever say that Putin doesn’t understand the use of a photo op. These 2 photos speak volumes to these 2 men and their characters. H/t to the Drudge Report.

Obama with a snow cone. from the TimesOnline

In a swift and unexpected decision, the Environmental Protection Agency today rejected a petition from environmental groups to ban the use of lead in bullets and shotgun shells, claiming it doesn’t have jurisdiction to weigh on the controversial Second Amendment issue.

Dontcha just love this media bias? For whom is the Second Amendment controversial? And why is it? It’s pretty clear to anyone who is literate:

A well regulated militia being necessary to the security of a free State, the right of the People to keep and bear arms shall not be infringed.

But the media love to throw in these buzz words and phrases – like controversial – to confuse and/or manipulate the readers thought process. And isn’t it kinda strange to call anything in the Constitution “controversial”? I don’t believe that the Founders intended for that document to be “controversial”. I really believe that they wanted the people to understand it, wrote it so that the people would understand it and they didn’t expect that over 2 centuries later we would need constitutional attorneys to explain it to us.

But hey, that’s just me.

The decision was a huge victory for the National Rifle Association which just seven days ago asked that the EPA reject the petition, suggesting that it was a back door attempt to limit hunting and impose gun control. It also was a politically savvy move to take gun control off the table as the Democrats ready for a very difficult midterm election.

This is the real reason that the EPA dropped this whole thing. The NRA had nothing to do with it, even though they are absolutely correct that this is nothing more than the first step on the ladder to gun control. It was the administration that sent word to the EPA to lay off the bullet thing in order to make it easier on the Democrats who are swimming against what we all hope and pray will  be a tsunami this election year.

And then there’s this from ABCNews.go.com:,

A conservative Alabama Democrat often criticized for backing Nancy Pelosi as House speaker dodged a question about supporting her again next year by saying she might get sick and die before he has to decide.

If someone is going to say something tasteless, rude or stupid, it will have to be someone with the CONSERVATIVE label before their name, whether they are Democrats or pachyderms makes no difference. The media is going to make damned sure they work that word in, anytime they can smear those who have a conservative ideology.

Newsweek and Bill Maher: America the Ignorant and Stupid

If America is ignorant, as Newsweek is claiming, then maybe this is an indictment of the government run education system that we have had in this nation for too many decades. Instead of blaming stupidity on the American people, maybe they should be pointing their elitist fingers at the liberal teachers union and the massive amount of money that we have thrown their way – and thrown away – for over 50 years. What do we have to show for the outrageous amounts that we have given to the Department of Education? An astronomical drop out rate (about 1.2 million students fail to graduate from high school each year) and falling numbers in comparison to other nations (in math scores internationally, only 4 countries have scores lower than ours and 23 nations score better than we do.)

And you know, doesn’t it just seem a little ignorant to call your own readers ignorant? I guess that’s why Newsweek was just sold for $1.

So to return to the beginning, Bill explains his stupid American comments: 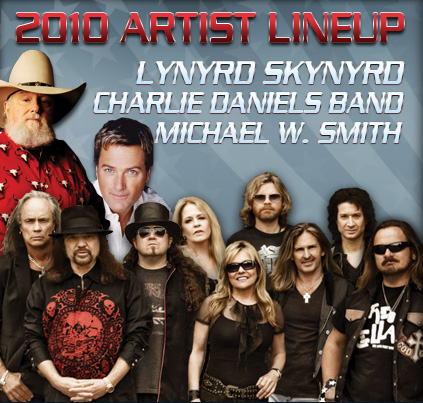 The concert was great fun. A little longer than I would have liked but still there’s nothing like being in the same areana with so many like minded, American patriots.

The hightlight though for me was Vicki and her son. What great people! and her son is just a wonderful kid. I wish we had 30million teenagers just like him. Vicki let me pick her brain about blogs and blogging and gave me lots of helpful tips and websites to check out. I’ll be tied up for weeks checking into all her suggestions and advice.

It was wonderful to talk to and spend time with someone who is on the same page about so many things as Vicki and I are.  And I’m sure this is not the last and only time we will get together.

Thank you Vicki for the wonderful weekend!

Big H/t to Vicki at Frugal Cafe’s son. He turned us on to this over the weekend and this man is just too funny: